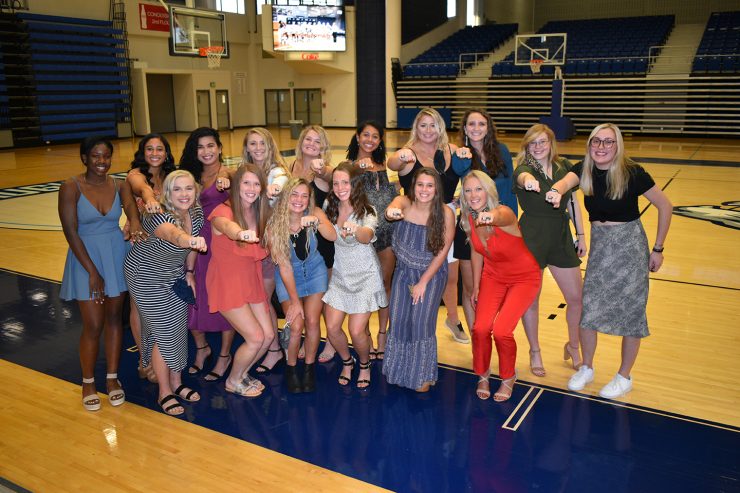 The 2019 Augusta University volleyball team might have had the greatest season in team history last year and now they have the hardware to prove it. The university held a ceremony for the Jaguars on Oct. 16 where the team received their official championship rings after a dominating performance all last year.

The volleyball squad went further than any other team in program history in 2019, winning 29 matches on the year, capturing a second straight Peach Belt Conference Tournament Title, and advancing to the Sweet 16 for the first time ever.

Augusta University President, Brooks A. Keel, PhD, threw a celebration for the team and coaching staff in Christenberry Fieldhouse on the Forest Hills Campus. Each player was presented with a championship ring while enjoying a meet and greet.

“The 2019 Augusta volleyball team represented Augusta University well both on the court and in the classroom,” Keel said. “They had an unbelievable season and we are so incredibly proud of their success.”

Meet the 2019 Jaguars by clicking here to catch up on all names, positions, bios, and stats!

The 2020 fall volleyball season was postponed due to COVID-19, but the Jaguars will return to on-court action this winter and spring in 2021. Augusta plays all its home matches in Christenberry Fieldhouse and fans can find more details at augustajags.com.

Student Life & Engagement is committed to providing innovative programs to help students get involved on campus. We aim to give students opportunities to develop leadership skills and pursue their interests through experiential learning. Our team supports over 100 student organizations, an engaged Greek Community, and advises the Jaguar Production Crew, Homecoming Executive Council, and the Student Government Association.